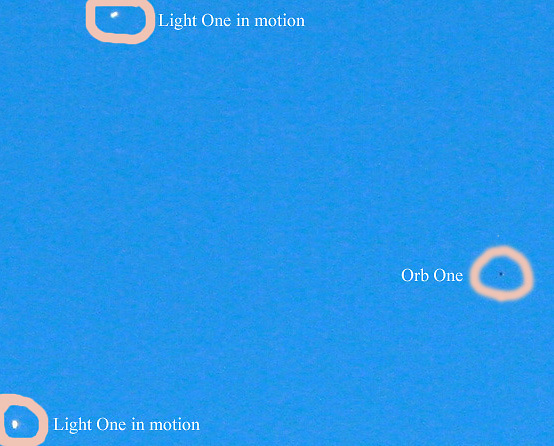 AJ Alexander - 051410 13 Bright white light UFO's and one that was not blured like the others because they were traving so fast that my camera shutter speed was not set
at a higher speed are all orb shape same type as the one in the photo over Fox 10 chopper, (just right of the two big bright ones further back) were flying and in the same direction, but would change directions on a dime one second there going right the next one or several would just go left or straight up or shoot down in a blink of an eye they were fast but very visible to the naked eye before they started zigzaging super fast. The staff from Lo-Lo's were witness to these UFO's over Central Phoenix, photographed towards the North East sky over from back entrance facing north of Lo-Lo's Chicken and Waffels 10 E. Yuma Phoenix, AZ Saturday May 14, 2010. (Could not focus in any closer because I only had a 105mm lens with me at that time)..Photo by AJ Alexander.#220
PHOTO BY AJ ALEXANDER